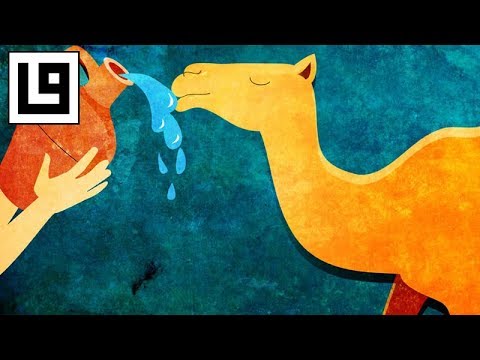 Here I read Chapter Five of my book The God Protocol.

(Thamūd rejected in its transgression
When its most miserable was sent out.
The messenger of God to them said:
The she-camel of God
And her drink.
Then they rejected him
And brutally slaughtered her
And their lord gave them over to destruction for their transgression.
Then he leveled them.)
91:11-14

And to Thamūd, their brother Ṣāliḥ:
He said: O my people: serve God.
You have no god but he.
There has come to you clear evidence from your lord.
This is the she-camel of God as a proof for you.
So leave her to feed in God’s earth
And touch her not with evil
For there will take you a painful punishment.
And remember when he made you successors after ʿĀd and settled you in the earth.
You make castles out of its plains and hew the mountains into houses.
So remember the favours of God
And commit not evil in the earth, working corruption.
Said the eminent ones who were proud among his people to those they deemed weak
To such as believed among them:
Know you that Ṣāliḥ is an emissary from his lord?
They said: We believe in that wherewith he has been sent.
Said those who were proud:
We deny that in which you believe.
And they brutally slaughtered the she-camel.
And they scorned the command of their lord.
And they said: O Ṣāliḥ: bring thou what thou promisest us if thou be among the emissaries.
And the earthquake seized them
And morning found them lying prone in their dwelling.
Then he turned from them and said: O my people: I have conveyed to you the message of my lord
And have been a sincere counsellor to you
But you love not sincere counsellors.
(7:73-79)

And to Thamūd, their brother Ṣāliḥ:
He said: O my people: serve God.
You have no god but he.
He brought you into being from the earth and settled you therein
So seek forgiveness of your lord and turn to him.
My lord is near, responsive.
They said: O Ṣāliḥ: thou hadst been among us one in whom hope was placed before this!
Dost thou forbid us to serve what our fathers served?
We are in sceptical doubt about that to which thou invitest us.
He said: O my people: have you considered
If I am upon clear evidence from my lord
And there has come to me mercy from him
Then who will help me against God if I disobey him?
Then would you not increase me other than in loss.
And O my people: this is the she-camel of God
As a proof for you.
So leave her to feed in God’s earth
And touch her not with evil
For there will take you a near punishment.
Then they brutally slaughtered her.
And he said: Take pleasure in your dwellings three days.
That is a promise not to be belied.
And when our command came we delivered Ṣāliḥ and those who heeded warning with him
By mercy from us
And from the disgrace of that day.
Thy lord: he is the Strong, the Mighty.
And the blast overtook those who did wrong
And morning found them lying prone in their dwellings
As though they had not lived therein.
In truth: Thamūd denied their lord.
Was it not: Away with Thamūd?
(11:61-68)

Say thou: None can grant me protection from God
And I can find no place of refuge besides him
Save communication of God and his messages.
And whoso opposes God and his messenger:
His is the fire of Hell
They abiding eternally therein forever.
(72:22-23)