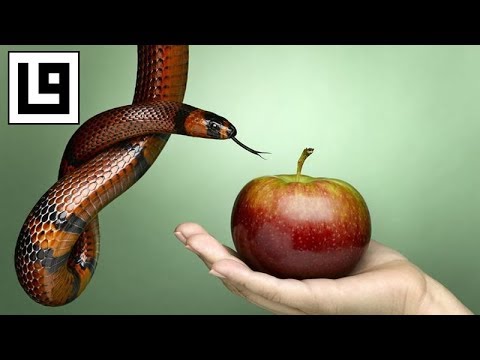 The shaytan is our enemy, so we should take him as an enemy.

An example of those who deny their lord:
Their works are as ashes in a violent wind on a day of tempest
They possess not anything of what they earn.
That is the extreme error.
Hast thou not considered that God created the heavens and the earth aright?
If he wills he will remove you and bring a new creation.
And that is not difficult for God.
And they will emerge before their lord all together.
And those who were despised will say to those who were proud:
We were your followers:
Can you avail us something against the punishment of God?
They will say: Had God guided us we would have guided you.
It is the same to us whether we be distressed or patient
We have no place of refuge.
And the shayṭān will say when the matter has been concluded:
God promised you the promise of truth.
And I promised you
But I failed you.
And I had a warrant against you only to call you
But you responded to me
So blame not me
But blame yourselves.
I will not answer your cry
And you will not answer mine.
I deny your ascribing to me a partnership before.
The wrongdoers: for them is a painful punishment. (14:18-22)

And we have created you.
Then have we fashioned you. Then said we to the angels: Submit to Ādam.
And they submitted save Iblīs.
He was not of those who submit.
He said: What hinders thee that thou dost not submit when I command thee?
Said he: I am better than he
Thou createdst me of fire and thou createdst him of clay.
He said: Get thee down therefrom
It is not for thee to be proud therein:
Go thou forth
Thou art of those brought low.
Said he: Grant thou me respite until the day they are raised up.
He said: Thou art of those granted respite.
Said he: Because thou hast sent me astray I will lie in wait for them on thy straight path
Then will I come at them from before them
And from behind them
And from their right hand
And from their left hand.
And thou wilt not find most of them grateful.
He said: Go thou forth therefrom condemned, banished.
Whoso follows thee from among them, I will fill Hell with you all together. (7:11-18)

O mankind: eat of what is in the earth lawful and good
And follow not the footsteps of the shayṭān.
He is an open enemy to you.
He but enjoins upon you evil and sexual immorality
And that you ascribe to God what you know not.
And when it is said to them: Follow what God has sent down
They say: Nay: we follow that wherein we found our fathers.
Even though their fathers did not reason and were not rightly guided?
And the example of those who are indifferent to warning is like the example of one who yells to what hears not
Save a call and a shout:
Deaf
Dumb
Blind:
They do not reason. (2:168-171)

The shayṭān promises you poverty and enjoins upon you sexual immorality.
But God promises you forgiveness and bounty from him.
And God encompasses, knows. (2:268)

And if there provoke thee a provocation to evil from the shayṭān:
Seek thou protection in God.
He is hearing, knowing.
Those who are in prudent fear, when a visitation from the shayṭān touches them they take heed
And then do they see.
When their brethren assist them in error
Then do they not cease.
(7:200-202)

And when the shayṭān makes their deeds fair to them and says:
None among men can defeat you this day when I am at your side
Then when the companies come within sight of one another he turns on his heels and says:
I am innocent of you
I see what you see not
I fear God.
And God is severe in retribution. (8:48)

The shayṭān is an enemy to you
So take him as an enemy.
He but calls his party that they might be among the companions of the inferno. (35:6)